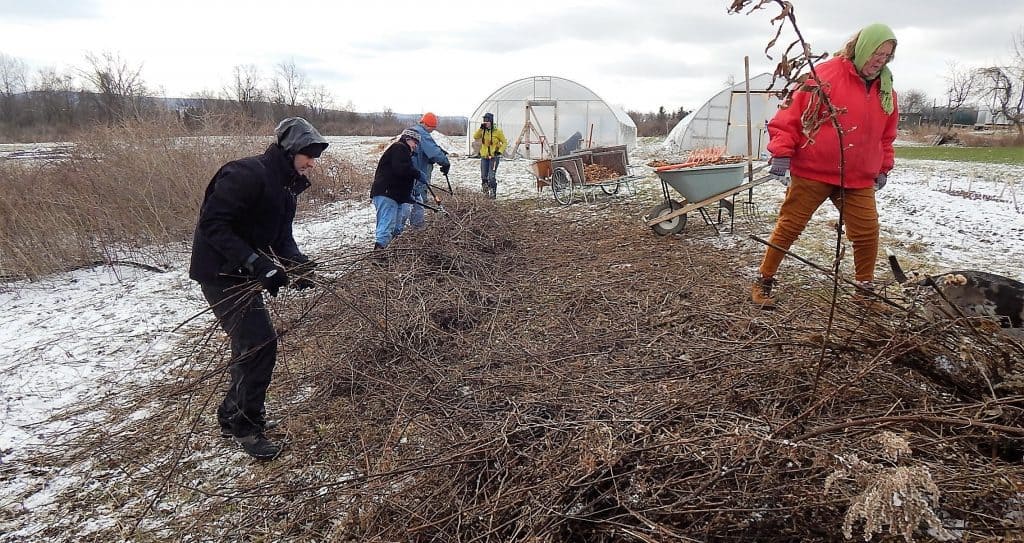 Participants arrived to the Building Permanent Raised Beds workshop, at the Incubator Farm and taught by Sean Dembroski of Edible Acres,  from as close as  Ecovillage and as far as Massachusetts. As we gathered, Sean quickly gathered some scrap wood and banged together an A-frame tool. Our goal as a class was to start with a sloped hillside covered in honeysuckle, multi-flora rose, grape vines, and raspberries; spend the day working with hand tools and our bodies; and create raised beds ideal for planting perennial tree crops.

Sean started on an area that had previously been cleared by volunteers by demonstrating how to use an A-frame tool with a level to measure out a bed on an even contour. Sean encouraged participants to improvise with available resources; we didn’t have flags to mark our beds, so we used little piles of woodchips.

Once our first bed was marked, we looked to our raw materials. We had a pile of woodchips, donated by Limbwalker Tree Care, an old round bale of mulch hay, and all of the branches and vines previously cleared from the hillside.  We began with the branches and vines, laying them horizontally along the bed. Large pieces were cut down to be more uniform. Once we had a mound of sticks, we piled on wood chips. Walking around the farm, Sean found a few piles of decomposing material- compost piles from various farm plots, left over from years past. We piled these into wheelbarrows as well, mounding them on top of the wood chips. Then we scraped a flat pathway along the bed, both to eliminate sharp tripping hazards, and to manage the flow of water. This we also covered with woodchips. By lunchtime, we had one complete bed! In order to maximize growing space, we decided to start the second bed it as close to the first bed as possible, while still being able to pass between the beds with a wheelbarrow.  We marked out the contour, which was close to paralleling our first bed.  We had used most of our leftover sticks and vines in the first bed, but we had more brush to clear, so we spent some time with loppers and pruners, and used these newly cut branches as a base for the second bed. We also decided to incorporate the hay we had on site, and piled it on top of the wood chips and sticks. With extra hay, we covered our pathway in a thick layer of mulch.  When we were done, it was hard to differentiate the second bed from the path, but Sean assured us that as it settled, the bed would reemerge, and soon break down to be rich soil for planting into.