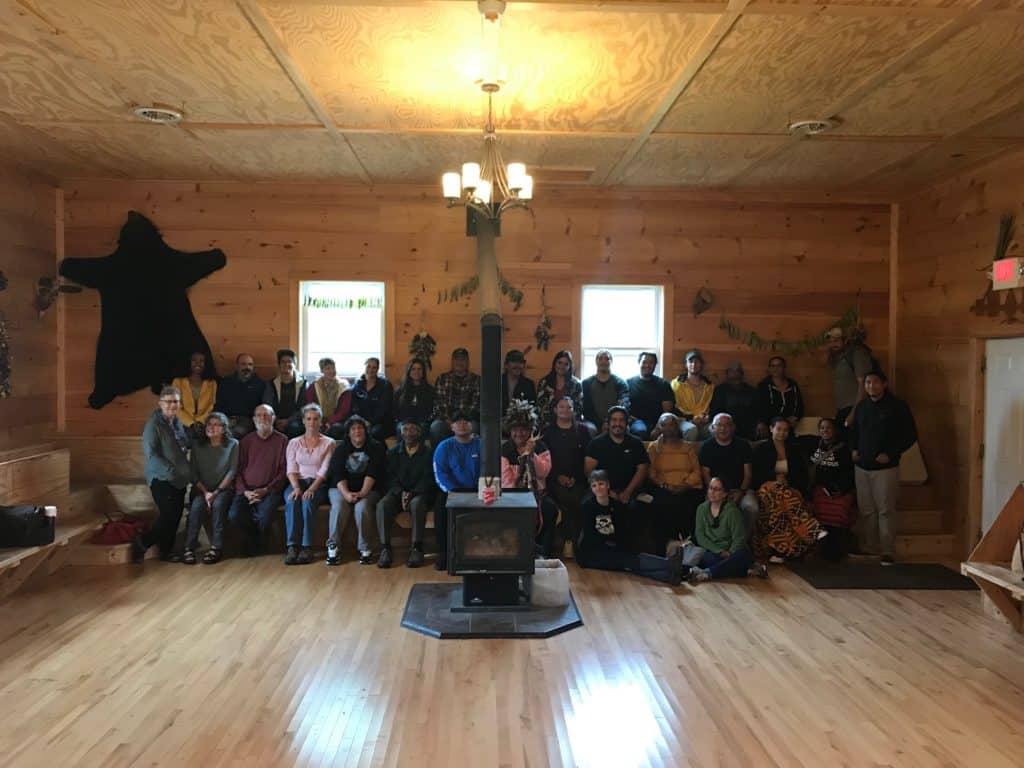 On Wednesday, October 2nd, as part of the work Groundswell Center is involved in with the Finger Lakes Land Access Reconciliation and Reparations Working Group, a group of community members from the larger Ithaca Area drove the hour up the lakeside to join people from the Gayogo̱hó:no nation to create and cultivate community.

The day was profound. We spent the morning learning in the schoolhouse about traditional Gayogo̱hó:no food, words, and history. Stephen Henhawk, Bear Clan, Faithkeeper, opened the day with the Thanksgiving, acknowledging all parts of creation, from the ground up to the sky world. It is tradition to open up all gatherings in such a way. It ensures that all are of one likemind. During the day, Stephen referenced this likemindedness as necessary and important way to move forward in our evolution together as growing humans. And the importance of Peace, or sgę:nǫ́, in all that we do .

Before we broke for lunch, even though the weather was dreary and chilly, we went for a tour of the farm, and were shown some traditional food preparation methods. They had a large log that was burned and then carved out, with a large wooden pestle. This was used to grind corn, they would use for food like traditional corn mush or corn bread. We learned that this way you’re able to control how fine the flour is ground, even though it really took some muscle to do it! The wood was not light!

Our lunch was beautiful, sitting all around the schoolhouse, mingling and eating food that was brought for the potluck. They made us traditional corn soup and venison stew which was a-maize-ing! I could do a whole other blog post about why traditional indigenous food ways can save the world, but I’ll save that for another day!

After lunch, our learning continued with members of the Language and Culture Revitalization Program talking about what they do there, but all along there was this air of excitement and anticipation. First some songs were shared from the Standing Quivers dance, a social round dance. We all had to join in this dance, and it was special to have people in that large circle. afterwards, Stephen kept talking about traditional songs and dances but there was still the air of excitement and anticipation! We didn’t know exactly what was going to happen… until Sachem Sam George came out in his regalia to show us the smoke dance! The smoke dance was a dance danced so fast, it could clear the smoke out of a room! Sachem Sam really showed us how it’s done! It was fantastic end to a day that nobody wanted to end.

Hopefully, we can return soon to learn more.