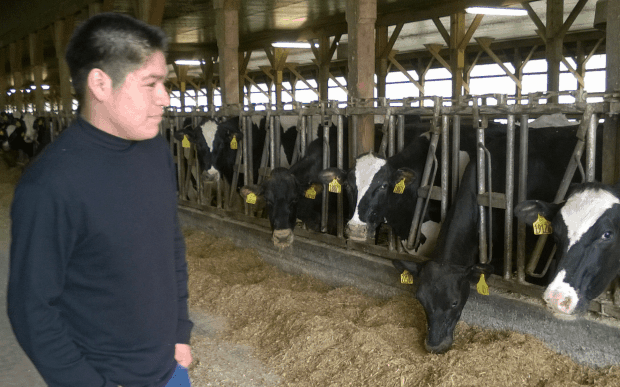 It’s lunchtime right now in the Groundswell office, and I’m enjoying a Black Cherry Chobani yogurt. My mind immediately goes to the panel of dairy farmworkers who spoke in Ithaca on Monday night, sharing their experiences and the findings outlined in the 2017 Milked Report*. The report from the Workers’ Center of Central New York and the Worker Justice Center of New York shared conditions in the dairy industry for immigrant dairy farmworkers based on interviews with 88 workers on 53 farms in the Central, Northern and Western parts of New York state. Many of the farms in the report sell directly to Chobani, a leading dairy purchaser in upstate NY. Monday night’s event, organized by the Tompkins County Immigrant Rights Coalition and titled “Milk Cows, Not Workers!”, and of which Groundswell Center was a sponsor, asked the audience to consider our own dairy consumption and whether we’re aware of the abuses that take place in the industry, as well as action steps consumers can take to support those who bring dairy products to our tables.

The co-authors of the report who were present, Carly Fox, Kathleen Sexsmith and Rebecca Fuentes, shared that the goal of the report is not about one particular farm or farmer but rather about a system that excludes farmworkers from basic labor rights. Farmworkers (along with domestic workers) are excluded in national labor law from basic protections guaranteed to other workers since the 1930s, such as workers’ compensation, health insurance, disability and the right to unionize and engage in collective bargaining. This makes fighting back against injustice in the industry even more difficult for immigrant workers, many of whom are also living in isolation on rural farms and are at risk of detainment and deportation by immigration enforcement. The Milked report outlines the various ways that farmworkers may struggle, including working 12 hour shifts 6 days per week, dismissals and threats from bosses when asking for a break, low wages, wage theft, inadequate training for dealing with workplace hazards such as aggressive cows/bulls, heavy machinery and chemicals, substandard and unsafe housing, isolation and retaliation from bosses. Some harrowing statistics included 2 out of 3 workers experiencing workplace injuries one or more times (68% of whom needed medical attention), workers leaving the farms on average once every 11 days, 41% of workers being detained by immigration enforcement when they have left the farm, and 80% of of dairy farms not qualifying for OSHA inspection because they have fewer than 11 employees.

Hearing from the farmworkers themselves was the most powerful part of the evening for me. Crispin Hernandez, a leader in the farmworker movement who is currently fighting for the right for farmworkers to organize in NY State, worked at his previous place of employment for 3.5 years and received no on-farm training. Milking 2,800 cows every 7 hours, he experienced insults from management, health impacts from the chemical sprays used on the cows’ teats, and witnessed a manager physically assaulting a coworker in front of the crew. When he took initiative to organize a protest in front of the farm and for all of the workers to receive longer gloves to protect them from chemical residue, the police were called and he was fired. Another worker spoke of an insect infestation in his on-farm housing, sharing a bed with other workers who were on different shifts, extreme cold and extreme heat without proper gear, and the fear that comes when you’re isolated and being exploited by your boss.

But these workers have also been organizing. With the support of advocates from the Workers’ Center of Central NY and the Worker Justice Center of NY, they have been working to pass legislation that “ensures equal access to driver’s licenses for all residents of New York State, regardless of immigration status”. Those on the panel spoke of the irony of not being able to drive to the store to buy the products that they’ve worked to produce, and how a lack of drivers’ licenses restricts the human right to movement, connection with friends, buying food and more. Crispin Hernandez is also currently suing NY State for the abuses he experienced on the farm, and fighting for the right for farmworkers to organize in the state Supreme Court. So as I sit here finishing my yogurt, I think of the action steps provided to us by those on the panel risking so much to fight for their rights. One was to sign the Driver’s License Campaign petition – you can do so here. Another was to write to Chobani, asking that they read the Milked report and commit to ensuring the rights of farmworkers from the suppliers they purchase from. To write your letter, click here. There are organizations locally such as the Tompkins County Immigrant Rights Coalition that work to support the rights of immigrants and need help– reach out and see if there’s work you can plug into. You can also read the Milked report and share it with friends and family, or even host a discussion group about ways to help advance farmworker organizing. Groundswell is in the process of organizing a “Farming for Justice” group, to support farmers and food producers to plug into these issues– stay tuned for more

As one of the panelists stated, dairy farmworkers help cows stay alive, which keeps our economy and this country alive. Without basic labor rights guaranteed by law, farmworkers will continue to feel like “ghosts who don’t really exist” as another panelist shared. At Groundswell we advocate for a local food system that is ecological, viable and equitable, and we see no equity in the current arrangement. We can’t let racism determine who has the right to protection from workplace abuses. We need a more just way of bringing food to our tables that supports the human rights of those who get it there.