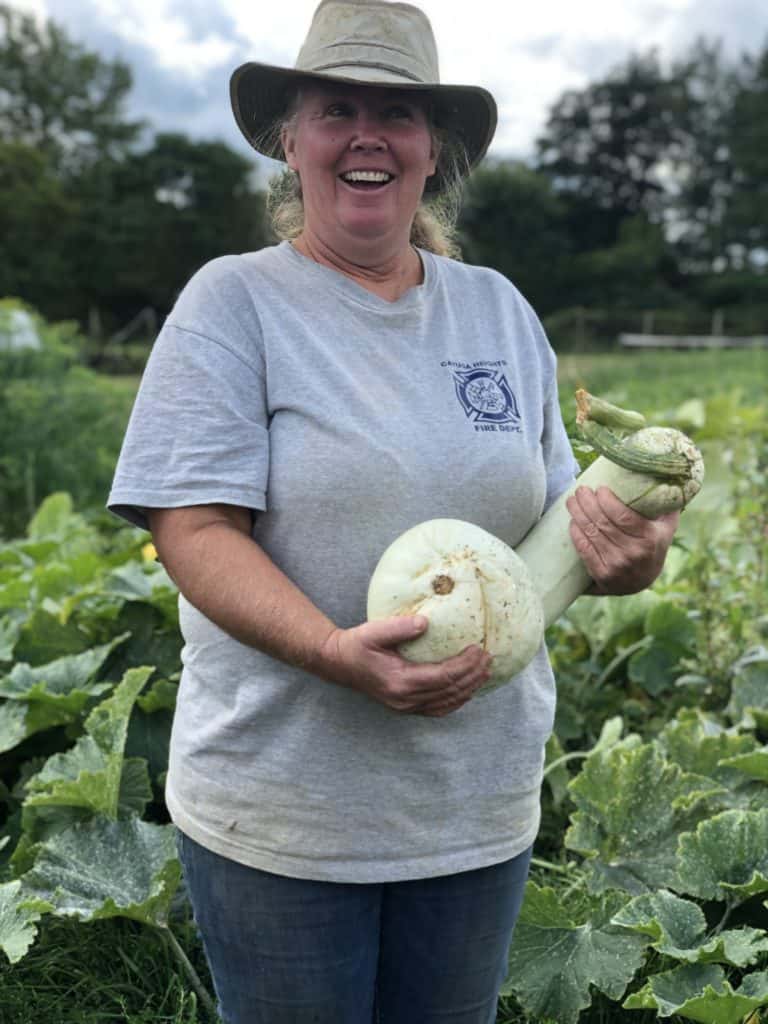 On Sunday, September 8th, a group of folks convened at Bloodnick Farms, in Apalachin, NY to attend a workshop led by Lisa Bloodnick called “Seed-saving: A Peaceful Resistance”.

Luckily, the weather held out, although we learned that any amount of wind is helpful when threshing and winnowing some seeds. But before we get to the technical parts, we have to highlight the amazing farmer Lisa Bloodnick. Lisa, who is an experienced farmer in the southern tier, is also an educator. Every year she welcomes a group of interns from Binghamton University to teach them how a small market scale production farm operates through active and direct experience. She also gives of her knowledge freely, and passionately. Her 5 acre fenced in farm is lush, and her draft horse helps cultivate the soil that it is on. Lisa, is also an avid seed-saver, and seed-keeper. What the difference, you say? Well, there might not be a definitive difference according to a dictionary, but the difference lies in the culture and story intertwined in the work. In short, seed-keepers acknowledge their lineage, and have ethics and morals regarding seed-saving. Lisa also mentioned Rowen White, and Stephen McComber as her mentors, both are Mohawk, from the Haudenosaunee Confederacy. Not all seed-savers are aware of the lineage of the seeds, or their own knowledge, and may not be well-versed in ethics and morals regarding seed-saving. However, it’s all certainly a non-linear cycle, because the learning and awareness constantly grows, like the seeds.

Well, our day at Lisa’s started with a beautiful farm tour. She talked about her work, and also talked about cultural appropriation in seed-saving, as well. She showed us the different varieties of vegetables she was growing this year, for seed and for production. Sometimes, these two worlds do not coexist due to the botany of plants, and more specifically, its reproductive tendencies. For instance, we learned that beans are self-pollinating: they tend to reproduce with themselves, although every now and then, a bean will decide to branch out, but that’s not a common occurrence. However, plants like squash, which are insect pollinated, which means they can cross pollinate between different varieties within the same species (yes, we have to go back to Family, Genus Species, in basic biology). So squash is a bit more of an extrovert than beans, so when growing for seed, and specifically presering that lineage of seed, we learned that you have to be more careful throughout the growing process, to minimize the chances of cross-pollination. Seed-saving 101…. More like seed-saving 201! We also learned a little bit about hybrids, and sterile plants which led into the conversation about corporate agriculture and the seed monopoly.

This is probably the most important factor around saving seeds! Did you know that saving seeds is actually a true act of resistance? Not only are you becoming self-sustaining (theoretically, you wouldn’t have to buy seeds), but you are actively taking action against the way that corporations like Monsanto are trying to patent seeds through hybridization. This means–in short– that a particular seed will not reproduce to create seeds after planting it! This means that that particular seed is sterile. This is NOT GOOD for the environment, for the plants, for the families that have grown their own food for centuries, and it’s just not good at all.

On the flip side, there’s also people that exploit rare seeds through going to different countries, eat food, and save seeds from the food the eat or some into contact with, bring it back to their home country, label it rare and sell it for profit! This is a form of cultural exploitation, which also fails to acknowledge the true story of that seed. However, telling stories like this will help bring this type of exploitation into a greater awareness, in hopes that it may stop.

Many stories short, our day with Lisa was more than informative, and likely everybody went home with a special seed, and a unique story, after Lisa shared some of her collection with us.  Here are some photos of the day: