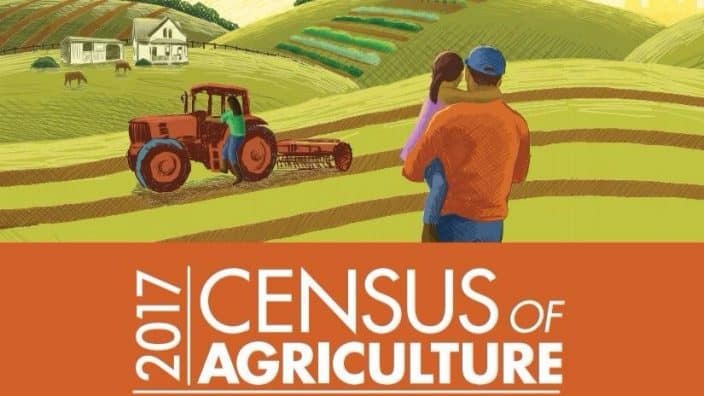 The San Diego Food System Alliance put out a brief article, that begins by succinctly describing the 2017 Ag-Census, and why its now 2019 and we’re only talking about it now: “This is an 820-page report that boasts 6.4 million new points of data about America’s farms and ranches and those who operate them. You now have your answer as to how long it takes to summarize a survey of some 3 million operations across the United States— about two years.”

Every 5 years the USDA puts out a relatively comprehensive agricultural census (yes, I said ‘relatively’–I’ll save that thought for another day). 2017 was the most recent census, and finally we are starting to see some articles that recapitulate the agricultural reports. Although facts can’t be disputed, each summary of the 2017 Ag-Census may have a different lens through which it collects information. Here we will share information gathered by the National Sustainable Agriculture Coalition (NSAC), Young Farmers Coalition (YFC) and Indigenous Food and Agriculture Initiative (IFAI). Overall, it is easy to see the correlation of Agriculture in the US and the overall economy.

“The 2017 Census of Agriculture puts hard data behind what American farmers and farmer advocates have known for some time – if we don’t invest in beginning farmers and the advancement of our family farms, and if we don’t put checks on increasing consolidation in agriculture, we’re going to be at risk of losing the ag of the middle entirely,” said Juli Obudzinski, NSAC Interim Policy Director.  “Seventy five percent of all agricultural sales are now coming from just five percent of operations. The total number of farms is down nationwide, while the average size of farms continues to increase. We can’t sit idly by while the middle falls out of American agriculture. If we’re going to reverse these trends, we need to focus on programs and policies – beginning farmer and rancher programs, local and organic agriculture, and farmer-driven research to name a few – that help our family farmers thrive, not just survive.” (NSAC, “Release: Agricultural Census Shows Continued Shrinking Ag of the Middle.”)

Fewer but larger farms, increasing median age of farmers represent larger and more challenging aspects of the 2017 Ag-Census. “The rate of younger farmers is not keeping pace with the number of farmers aging out of the fields.” (YFC, “Release: New census reveals threat to the future of agriculture as average age of farmers continues to rise.“) The good news there is an increase in beginning farmers, women farmers, organic farms and local food sales.

YFC also says a few words that are worth repeating, especially looking at the future generations as those who inherit the present challenges we face with climate change:

“The U.S. needs more young farmers to ensure healthy food for our communities and to steward our water, air, and soil resources into the future. Unfortunately, the number of Latinx and non-white primary producers did not increase. Ninety-five percent of U.S. primary producers surveyed identified as White; the number of Black, Latinx, Asian American, and Native American primary* producers all decreased between 2012 and 2017. Despite these concerning trends, the Coalition is thrilled to see an increase in the number of female farmers represented in agriculture. Forty-one percent of farmers in their first 10 years of farming are women and the total number of female principal operators increased by nearly 70%. ‘We hope that these new findings will lead to a concerted effort across government to support young farmers, especially young farmers of color, in entering into viable careers in agriculture,’ said Sophie Ackoff, [Vice President of Policy and Campaigns, YFC].”

And as I read these summaries of the 2017 Ag-Census, I also did some searching around for a summary released by an Indigenous led organization or coalition. This was not an easy task! What I found was very brief, although I feel that further in the future we will see more comprehensive reports. In the short report released by IFAI, it highlights the positive increasing trends in agriculture with American Indian/Alaska Native (AI/AN) producers, operations, and operations. There is a 7% increase of farms with AI/AN producers, and an average 25% increase in fruit, nut, sheep, goat, cattle ranching/farming, greenhouse, nursery and floriculture operations. Unfortunately, this summary is not specific, and I hope to find more information soon!

A very long 2017 Ag-census in short: We need more young farmers, more local farms, more conscious stewardship of land, and better land linking methods for those who want to steward land that are not able to! 75% of all farm sales to the big 5% farm operations, and I can almost certainly say that these massive agri-business operations are not climate friendly! Remember where our food comes from, friends.

*Something I find help in discerning some of these reports and terminology is this file provided by the USDA, “General Explanation and Census of Agricultural Report Forms”.