Farming For Justice- Roots Throughout the Current with Leons Kabongo

Farming For Justice- Roots Throughout the Current with Leons Kabongo

We invite you to join us for a storytelling event with Leons Kabongo, policy worker and leader of the Young Jupiter Market Garden. He will be sharing his story and what has led him through a lifetime of food justice and advocacy work. 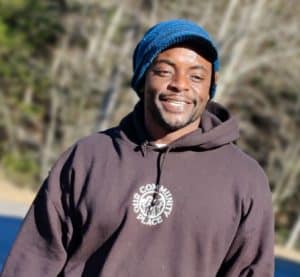 Leons was born in the Democratic Republic of the Congo and the capital. His childhood was spent in Goma, a small town in the eastern part of the country in the region of North Kivu. Leons was forced to mature before his time due to the traumatic experiences that he endured in the Democratic Republic of Congo before reaching 15 years of age. After the Rwandan genocide in 1994, the region of North Kivu especially the town of Goma, welcomed all the Hutu refugees who ran away and sought asylum in the Congo in search for safety and a better lifestyle. Forward to 2002, the most dramatic volcanic eruption of the Nyiragongo volcano in Goma happened, and his mother and brothers were all present. So, two years later in 2004 they left the town of Goma to join their father here in America. Leons graduated from Garfield High School in Prince William county in northern Virginia in 2008. In 2013, Leons received a Bachelor of Science in Economics with a minor in business management from Shepherd University. Leons speak five languages. In 2016, after farming for a year and learning the conventional methods of agriculture, Leons graduated from West Virginia University, Davis college of agriculture and natural resources and design with a focus in Community Development, and took a job at Our Community Place a few years after, applying his knowledge of agriculture, farming, community and non-profit work with him.

To learn more about Leons visit the following links:

More about the Jupiter Market Garden

Click here to see all events in the events calendar