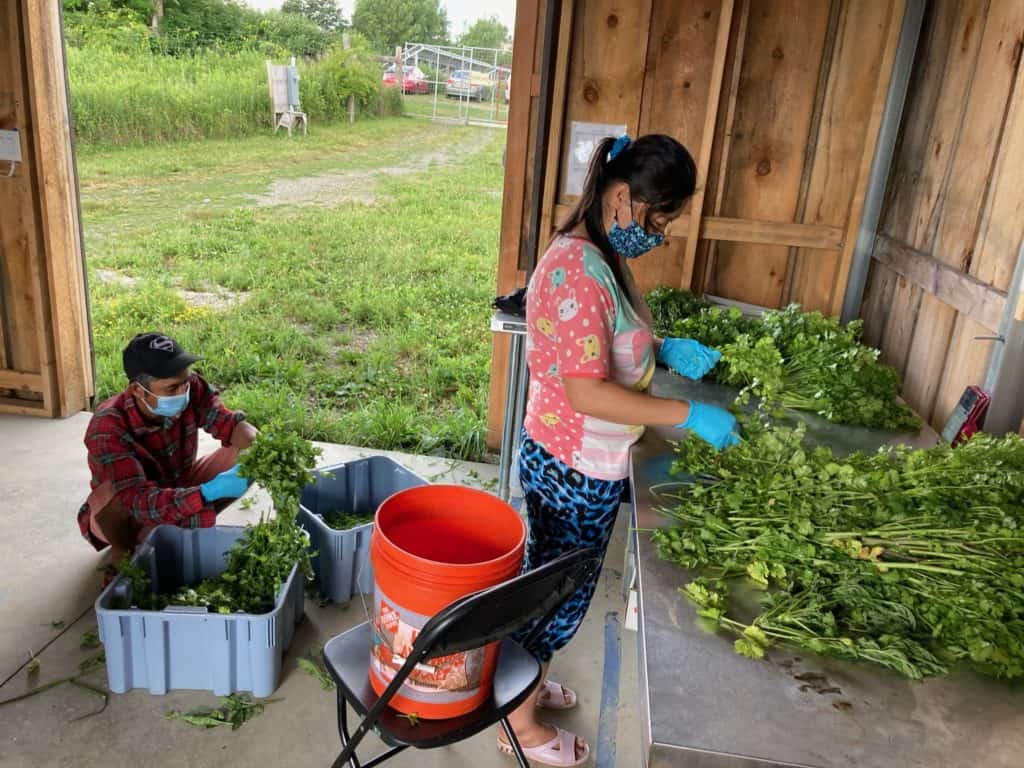 Groundswell served as an intermediary between distributors and farmers, working closely with small farmers to combine – or aggregate – their produce with other local growers in order to facilitate bulk sales.

Three farmers at the Groundswell Incubator Farm, Ka Leet, Eh Hser, and Plew Wah were the first to try out this new market opportunity. All three farm families planted cilantro in the spring. When the cilantro was ready to be harvested, the growers found themselves in a quandary. Each farmer had 1-2 cases (24 bunches per case) of cilantro. This was too much to sell to friends and neighbors, not enough to warrant a delivery to their normal markets – Asian Markets in Utica, Buffalo and Syracuse – and without the ongoing production to begin a regular sale to local wholesale buyers such as grocery stores or restaurants.

Through partnership with Groundswell and Headwater, the farmers combined, processed, and packaged their produce and sold in bulk to the food hub. The food hub then sold this produce to schools, restaurants or individuals.

“Thanks so much for believing in us, and for this incredible experience – we have learned TONS and can’t wait to apply that next season.”

Groundswell also extended this new market opportunity to other small farmers in Groundswell’s network including Attila the Hen Community Farm, Conuco del Buhío, and several others.

Lily and Dave at Attila the Hen Community Farm were in their first season expanding their garden to grow food for sale. After a brief trip out of town, they came home to find their swiss chard decimated by a groundhog. At this point, they realized they would not produce the quantity for wholesale that they hoped to when they joined Groundswell’s aggregation group. However, they decided to do everything they could to save the swiss chard! After cleaning out chewed leaves, repairing their fence, and checking the crop daily, the chard rebounded for a beautiful late-season harvest for Headwater.

Because Groundswell was sourcing from several farms, Headwater could purchase chard regularly through the group, regardless of challenges and supply variations from each farmer. Rainbow chard was especially popular with the statewide Nourish New York program, and often went to schools and fresh vegetable boxes for individual homes. Groundswell aggregated 36 cases, or roughly 700 pounds of swiss chard from 3 different small farms.

Another new farm that participated in Groundswell’s produce aggregation was Conuco del Buhío, located at the Traditional Center for Indigenous Knowledge and Healing. Alexas, Joe, and Maya expanded their growing space in 2020; their goal is to use traditional indigenous methods such as cultivating the three sisters crops (corn, beans, and squash), and to save native seeds for their farm and the community. The entire farm is run off-grid, and the farmers set up a gravity-fed irrigation system in the early spring. With a focus on squash, Conuco del Buhío ended the season with beautiful red kuri squash to sell to Headwater Food Hub. Red kuri is a sweet and delicious winter squash variety, especially suited to the 2020 growing season because of its drought tolerance.

“I just got like really emotional over our squash – the first produce we’ve ever grown for sale!”

Food Hubs are an innovative solution to regional distribution. Headwater was started in Western NY but has been spreading their aggregation and distribution eastward across New York as demand for local, organic produce increases. Groundswell is thrilled to be working with Headwater to increase sales opportunities for the small farms which make our local food system vibrant and sustainable.

To accommodate the increasing need for product aggregation, in 2021 Groundswell will build a large walk-in cooler in downtown Ithaca so more regional farmers can take part in aggregation and connect to critical market opportunities.\

Make a donation to Groundswell to make this project and other farmer-led initiatives a complete success.